Please enter your username or email address. You will receive a link to create a new password via email.

New home sales in January up amid global economic uncertainty

New home sales held their own in January amid the volatile global economic climate and the coronavirus outbreak in the latter part of the month.

Last month’s sales were driven by competitively priced existing projects and a spurt of buying by foreigners in the prime or core central region, analysts said.

There were 598 units released in January, up 61.6 per cent on the 370 in December, with three new high-end projects – Leedon Green, The Avenir and Van Holland – all launched in the prime district. Sales in this zone accounted for 21.5 per cent of all transactions – the highest level since January last year.

Projects in the city fringes or rest of central region accounted for 41.9 per cent of the total sales (excluding ECs), followed by the suburban areas or outside central region at 36.6 per cent, she added.

Jadescape in Shunfu Road, which was launched in September 2018, was the standout, with 56 units sold at a median price of $1,690 per sq ft.

The second highest seller was Treasure At Tampines, which sold 50 units at a median price of $1,371 psf. 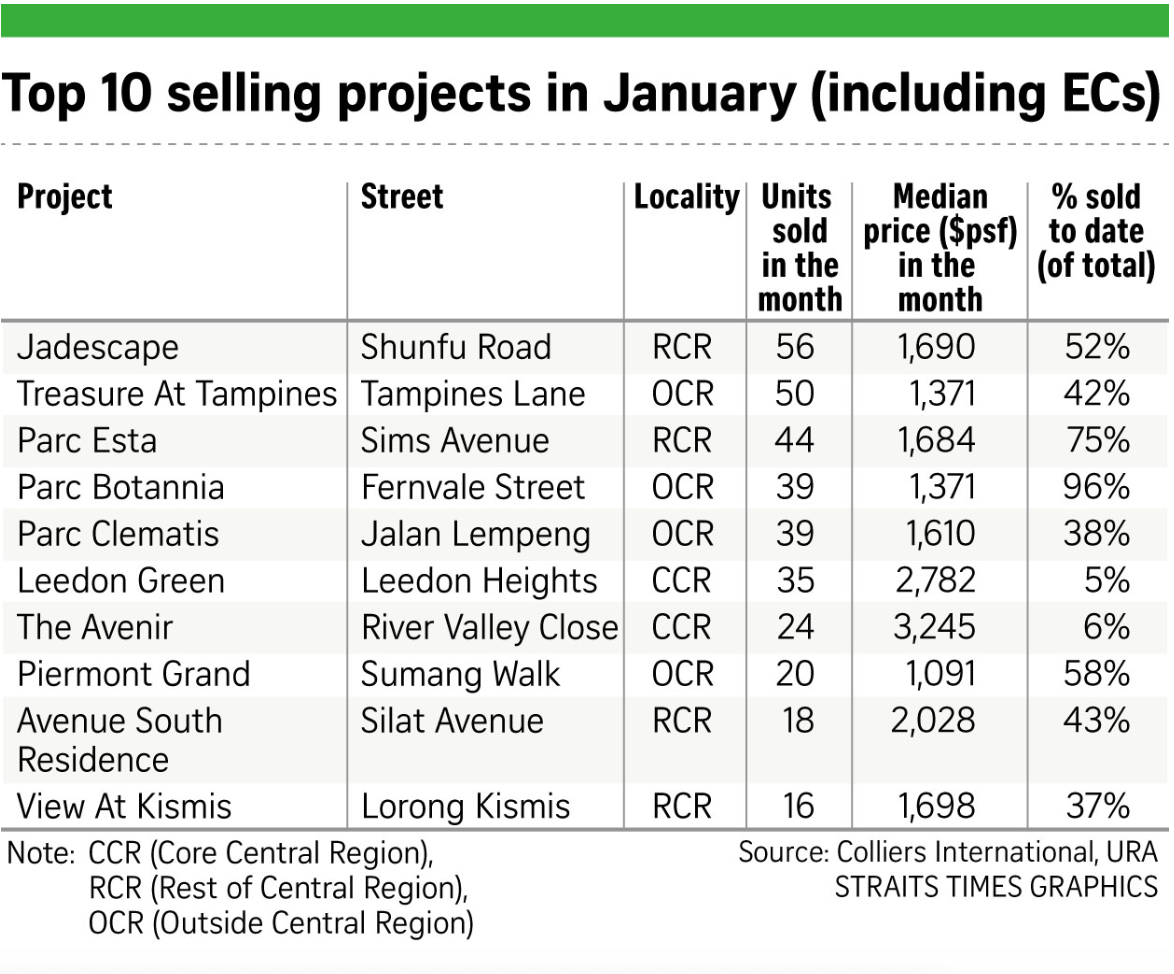 Developers moved 638 units last month including ECs, up 15.8 per cent from December and 45.7 per cent higher than in January last year.

Whether this sales momentum can be sustained will depend on whether there is a crisis of confidence in the market due to the economic damage from the virus outbreak, said Ms Tricia Song, head of research for Singapore, Colliers International.

There are concerns that the outbreak could dent demand for homes as people shun crowded places such as showflats, and foreign buyers, particularly those from China, postpone purchases because of the travel curbs.

If the outbreak is protracted, some of this year’s planned new launches could be pushed to 2021, Ms Song added.

But home buyers seem to have shrugged off virus fears for now.

Wing Tai Asia’s 522-unit The M condominium reportedly drew 1,000 visitors at its preview on Saturday. ECs also pulled their weight, with Parc Canberra selling 64 per cent or 316 out of 496 apartments. Meanwhile, the 548-unit OLA in Anchorvale will launch by the end of the month.

January’s sales figures also show that underlying demand is healthy, with analysts expecting pent-up demand to boost transactions in the second half of the year if the virus threat abates.

IN RECENT months, foreigners' purchases of luxury condo units in Singapore, including penthouses,...

SINGAPORE (EDGEPROP) - Action hero Donnie Yen and wife weren’t the only ones who headed to the...